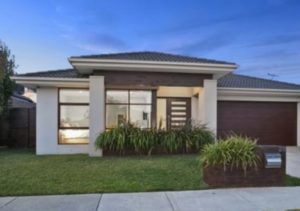 We also inspect new houses and don’t think that new homes do not have defects as they certainly do.

We recently inspected 2 new 3 bedroom units in Craigieburn, the builder was not the best builder we had encountered, we had no previous contact with him and I can honestly say that not only were his people skills bad his building expertise was worse.

The energy report, inclusion list, and specifications form part of the contract and are important documents advising the builder and client what there responsibilities are in relation to the building contract .

The specifications stated that the builder was to install Glass wool Batts for walls and ceilings but unfortunately the builder did not install insulation.

Manholes were to be 400×600 with manhole ladders installed to both units-Builder did not install ladders as was required.

The Bricks were the wrong colour and make, Evaporative cooling not installed, dishwashers ,exhausts and cooktops were different brand to what were required and windows installed were not double glazing.

These units were a nightmare and the client decided to pursue action at VCAT claiming damages against the builder.

Because its a new house does not mean its free of defects, always get a new house inspection before your house  handover from builder.

Requirement of every new house build is to keep surface water away from the foundations,in this instance the builder in his wisdom decided there was no problem and despite numerous requests to follow the Building Code and rectify this issue, it was never done.

The photo above was taken by the client 2 months into construction and remained like this for a period of 7 months due to a dispute between the parties ,still this is no excuse for the builder to not rectify defect. 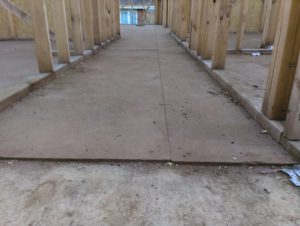 Where the two planes met there was a difference of 36mm which is classified as a major defect with not an easy path for rectification by builder.

The VBA’s Standards and Tolerances states-  Levelness of concrete floors Except where documented otherwise, new floors are defective if within the first 24 months of handover they differ in level by more than 10 mm in any room or area, or more than 4 mm in any 2 m length. The overall deviation of floor level to the entire building footprint shall not exceed 20 mm.

Builder required to rectify so as to comply with this VBA clause ,no surprise that VCAT ruled in favour of the client -builder was not happy.

Buying an existing house can be a daunting experience and its always wise to contact a building inspector to help you with deciding that the house you are buying is free of any major or minor defects including structural damage. 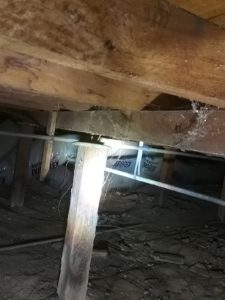 Never assume because the house looks great from the outside that it has no problems internally as to an untrained eye all defects can be hard to pick up.

You could be stuck with a house that has many thousands of dollars of defects that you are not prepared for financially .Buyer Beware.

We recently inspected a home in Lilydale that was approx. 36 years old,brick with timber stumps.

The floors internally were not level with a lot of bounce in kitchen, bedroom areas.

We discovered that many  bearers were not sitting on the stumps they were suspended in air, and the base  of stumps were rotten and required urgent replacing and rectification by a re blocker.

The kitchen walls had 12mm vertical cracks which in my opinion was caused by subsidence due to increase moisture levels to sub floor soil -the downpipes were not connected to storm water as we discovered.

Unfortunately the client had already bought this house 6 months earlier as he was advised by a friend of his that the defects were all cosmetic.

The client did not have the funds to rectify all these defects and he had to resort to borrowing the money from his father,if only he had conducted a pre purchase house inspection before he signed the contract he may have been able to re negotiate the price or not proceed with the sale.

House Inspections are available 6 days, we always answer our phone and only work for you the client.

Our house reports are comprehensive with photos detailing where defects are located and cost to rectify ,you are in good hands when you put your trust in us.